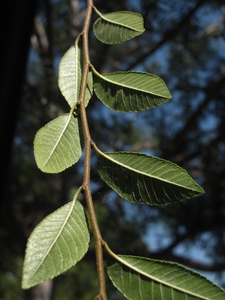 Manuel J. Rodriguez says, "I’ve photographed the landscape for several decades, primarily in the Oceanside, Calif., area. I’m constantly looking at a given landscape’s totality, from structures, infrastructure and landforms to some of the most ubiquitous objects on the planet – trees.

Trees present form, line and texture in a myriad of ways. And they interact with light – reflecting it, filtering it, causing shadows – that one can make an image of the same tree every day for a year and the result will be 365 distinctive photographs.

As long as I’m able to photograph I’ll be photographing trees."

Started career as a newspaper reporter and sometime-photographer for the Squirrel Hill Times, Pittsburgh, Pennsylvania.

In mid-1990s, stopped photography to pursue full-time career as a technology writer, which continues to this day. Have served clients such as Cox Communications, Spectra-Physics, Coherent, Raytheon, Gemological Institute of America and Broadley-James Corporation.

Around 2007, resumed photography, this time focusing strictly on personal work with digital cameras. For the past several years have concentrated my attention on fine-art/street/documentary photography in and around my home city of Oceanside, California. 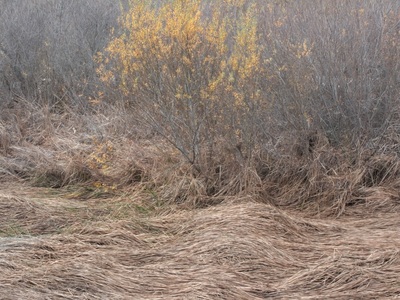 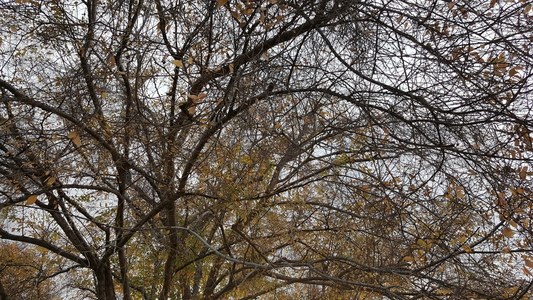 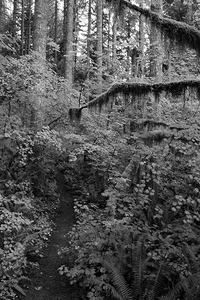 RAINFOREST by Mara Zaslove
(Click on image for larger view)

Mara Zazlove's photographs are entries to her soul, connecting the intangible to the tangible through light, time and memory. Often using natural light to capture what she feels in her heart and sees with her eyes, taking photographs has become as essential to her as breathing air, and in some ways, has evolved into a sixth sense.

Growing up with a father who was a fine artist, Mara was surrounded by his work and sensibilities. His influence made a profound imprint on her and she often finds herself mirroring his visual style.  She innately responds to form, patterns, shapes and composition and finds that this early exposure permeates her sense of balance and style.

Mara thrives on creating visual conversations that embrace the universality of aging, childhood, life on the street and how “human beings” impact the natural world. Either candid or anticipated, Mara seeks to convey a uniqueness particular to each individual that invites the viewer to explore their own life's path with that of the subject documented.

Mara Zaslove is a Los Angeles based photographer who thrives on creating visual conversations that embrace the diversity of the human spirit, the universality of aging and the beauty of the natural world.

She received a BA from the University of California, Berkeley and later, a Teaching Credential at U.C.L.A.  After completing her MA in Counseling and Guidance from California State, Northridge, she became a Licensed Marriage, Family and Child Therapist.

Her background as a therapist informs her photographic work and brings a heightened sensitivity to how she perceives the world.

Her images have been featured in numerous publications including Shadow and Light Magazine, F-Stop Magazine as well receiving Honorable Mention and Finalist in several categories of the Annual 11th, 12th and 13th Julia Margaret Cameron Awards.  Mara currently lives in Santa Monica, CA.

My work was chosen to be featured in the New This Week Collection on Saatchi Art's homepage. You can see the collection here.

Two of my photographic collages were curated by Holly Tempo into the Pulse Of LA 2019 exhibition at SoLA Gallery sponsored So. California Women's Caucus for Art.

My image, Mesmerizing Dancer, was selected by Joshua Elias to be in The Pasadena Art Show 2019 in conjunction with Art in the Arthouse.

Finalist in the 3rdAnnual Black and White Art Exhibition on Fusion Art.

Three of my images from my “Butoh” series received an Honorable Mention in the Women Seen by Women Category of the 13thJulia Margaret Cameron Awards (Non Professional Section).

Two of my images were curated into Common Threads ll Open Theme by Richard Chow.  They will be exhibited at the Angel City Brewery during MOPLA.

My image, Mime, was selected for the ‘Color It Red 2019 Shadow & Light Magazine Single Image Showcase.

Ancient Lines and Sun Goddess were curated by Claudia James Bartlett (director of Photo L.A.) into and exhibited with OSLA (Open Show L.A.) at Photo L.A. 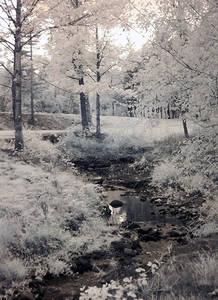 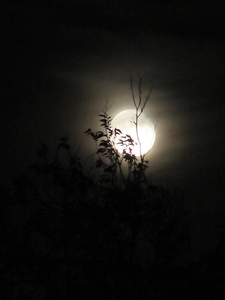 SILOUETTE by Mara Zaslove
(Click on image for larger view) 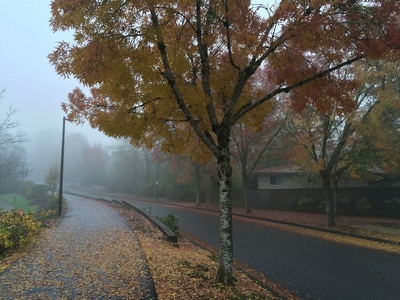 FALLTREE by Michel O'Hara
(Click on image for larger view)

Michel O'Hara says, "“From the tree across the way, and all the other places that brought you here." As a photographer I am drawn to quiet sensitive connections between light, object, gesture, and color. My photographic work centers on home, place, and longing. In my career, I travel consistently and inhabit different hotels or friends apartments in a multitude of towns and cities. Photography grounds me during this time and it’s in the natural world where I find these symbols that make up the poetry of a place."

After 15 years in Portland, OR I recently relocated back to Los Angeles, CA where I work as a freelance film and commercial producer. I have studied photography under Todd Hido, Alex Webb and Rebecca Webb and my photographs have been shown as part of group exhibits at the Curated Fridge, Lightbox Photographic Gallery, and the Griffin Museum. 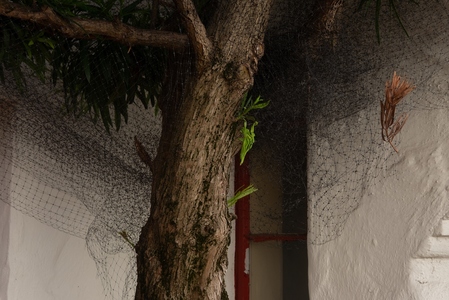 NETTREE by Michel O'Hara
(Click on image for larger view) 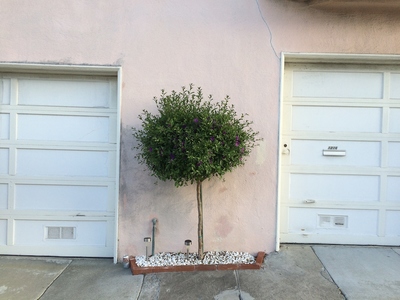 PINKTREE by Michel O'Hara
(Click on image for larger view) 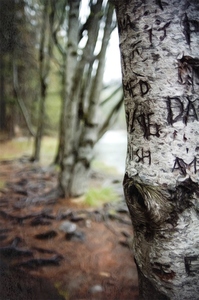 Nina Collosi-Martinez says, "Nature is my church; a place where I feel centered and grounded, without the buzz of everyday life.

I find myself drawn to trees and their seasonal changes, dropping leaves without regret in the Fall, and the blooming of new growth in the spring.  My favorite is naked trees,  hauntingly beautiful and mesmerizing standing starkly against the open sky.

Photography has enhanced my observation skills, aiding in the ways I see the seemingly ordinary or familiar.  I hope to never lose my awe and appreciation of nature’s gifts." 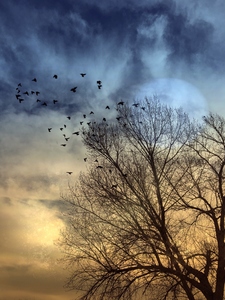 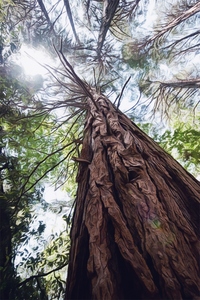 ILLUSIONS by Nina Collosi-Martinez
(Click on image for larger view)

Olesya Volk says, "My  art works come  out as attempts to "translate"  from the fantastic hieroglyphs  that I see in  the patterns of nature, mostly in the tree bark.

In other words, they are  sort of "snapshots" from  the process of "reading" the Book of Nature by the mind.These snapshots exist somewhere  in between  the imagery and the wording. I imagine the  trees as folios and libraries that can be read, perhaps as well as any thing around if we attune to it…The mind projects meanings onto the shapes and lines, but they are being reflected back,  startling  and puzzling… there is always a sensation of a mirror dialog, of having been  "read" by the Book of Nature itself."

Olesya Volk (a.k.a. Olga Volozova)  is a Los Angeles-based artist/writer.
She was born in Russia where she started doodling and also, writing and publishing her tales and puppet plays.

She moved to the US in 1992, studied animation at UCLA, then worked doing  web animation and illustrations.

Three of her books, in the graphic novel style, were published by the Sparkplug Comic Books ( Portland, Oregon):" The Airy Tales", a collection of tales, "with a touch of nonsense"; " Rock That Never Sleeps" ( in collaboration with Juliacks, two fantasy stories about the loss of memory) and, based on a legend of a famous kabbalist, " The Golem of Gabirol" ( which made it  into the "Best Comic Books of 2014"  ) Recently she  self-published a graphic novel "The Green Zybari" .

In her art work,  she explores the patterns of nature, mostly the tree bark, as a possibility of intuitive "readings" and  leaps  into the primordial language.

She often uses the old Flemish masters technique which she has learned at the Visionary Arts seminars  following the tradition of the fantastic realism in  Vienna.
She exhibits her work in Los Angeles and internationally. Her art genres also include mixed media, small dioramas, paper theatre. 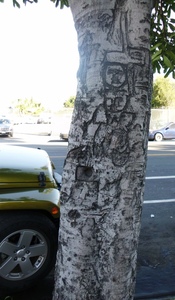 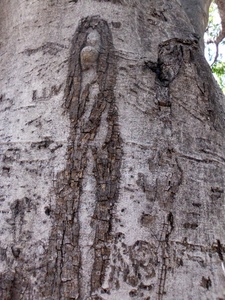 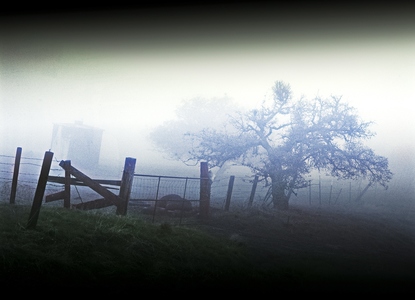 Paul Ivanushka (b. 1960, Highland, NY) is a fine art photographer currently “In the woodshed” studying the vicissitudes of gum printing using single and multiple negatives. 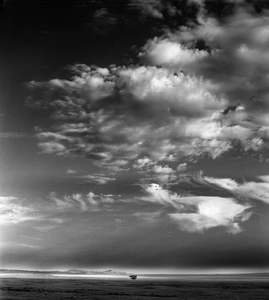 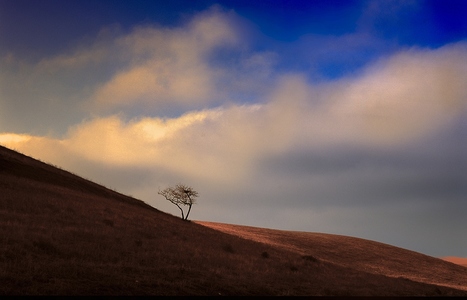 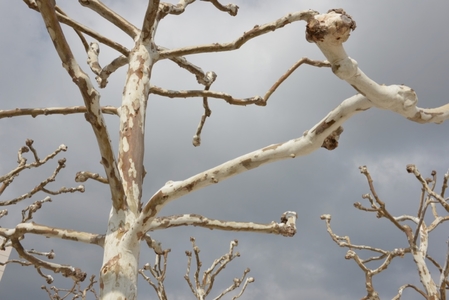 Terry Barczak says, "I am a long-time street photographer with a range of ongoing projects. My photographs often play with illusion, deception and ambiguity, revealing the unexpected and surreal in the ordinary.

My quest to create pictures is always a process of discovery, graced by possibility and good fortune. When I am out in the world looking, searching, collecting, and sometimes finding, the life force of trees is a universal presence. Walking in congested Los Angles, strolling through Central Park, or in a neighborhood anywhere, I come across trees with a limitless orchestra of beauty and character. Like portraits of the people I meet, they are an enduring and abundant subject for me.

I am a Minneapolis, Minnesota based street photographer  Largely self taught I also studied at Visual Studies workshop in Rochester NY and Lightworks in Minneapolis. Though cities still provide me with subject matter, I also have projects that look into landscape, abstraction, portraiture and religion.

In addition to numerous exhibition of my photographs, I have also served as art director with filmmaker Shelli Ainsworth on short and feature films, taught photography at a variety of institutions and worked in the photography department at Walker Art Center in Minneapolis. My work can be viewed at http://terrybarczak.com and on Instagram as Terry Barczak. 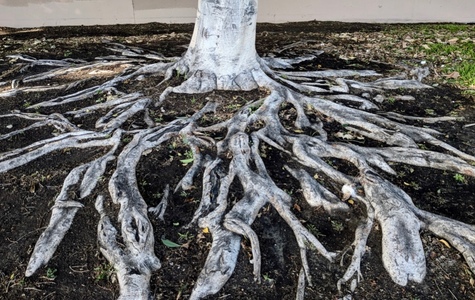 FLOW by Terry Balczak
(Click on image for larger view) 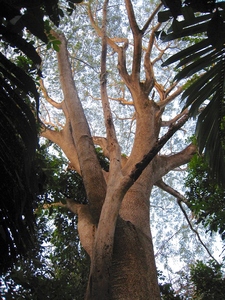 PORTAL by Terry Barczak
(Click on image for larger view) 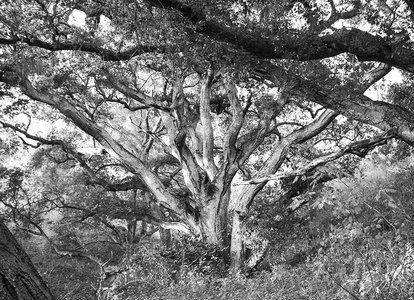 1 by Ken Weingart
(Click on image for larger view)

Ken Weingart says, "The fine art photography that I am currently creating is focused on psychological expression. In my most recent series: Tree Portraits, I explore the idea of trees that have personality and soul. I hope to branch out further in art with a storytelling process utilizing new genres, mixed media, collage, and video art — and blending them all together with photography."

Ken has worked and lived in New York City, Los Angeles, Italy, and Spain. He has also exhibited in multiple solo and group shows in the U. S. and Europe.

Out There - City of West Hollywood - juried by Cliff Benjamin from Western Project, Group Exhibition 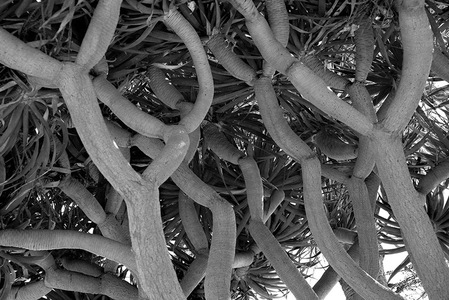 2 by Ken Weingart
(Click on image for larger view) 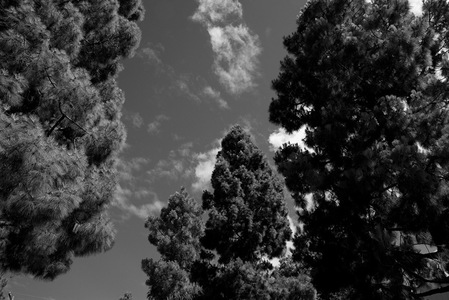 3 by Ken Weingart
(Click on image for larger view)