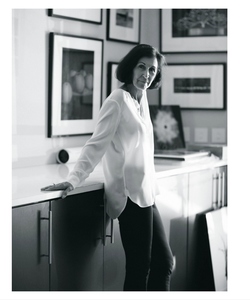 Laurie: "Thanks Susan for saying yes to an interview!  “This past summer you have celebrated 40 years of running your gallery. Quite an achievement! Because I have an interest in children and how small humans come to make decisions that lead to adult life choices, I wonder, what was it in your youth, do you think, that influenced your choice to represent photographers and own a gallery."

Susan: "Laurie, thank you for the opportunity to share my thoughts on my 40-year career in the world of fine art photography.

Perhaps some early history will help tell my story: While there may have been some hidden events in my youth that perhaps led to this much later in life decision to open a gallery, I cannot put my finger on a specific. One thing that was quite evident in my life, from the earliest of days, was that my mother was a teacher working full time, putting her out of the home every day during the week. She employed a very competent person to take care of my brother and me. As I look back, I see that we both turned into very successful individuals, so surely it was not from our mother being absent during those most formative years.

My education was in liberal arts at the University of Buffalo (1966) where I received an undergraduate degree in Speech Pathology and Audiology. After that, I went on to study at Boston University and received a Master’s Degree in Special Education (1967-1968) with an emphasis in Deaf Education.  I taught for a short period of time at the Horace Mann School for the Deaf in Boston before moving to Guam (1968) where I was hired by the government of Guam to work with and teach a group of 60 deaf 3-year-old children to speak. It was a monumental challenge, but one which I welcomed and grasped onto completely.

I lived on the island of Guam from 1968-1970. Living in Guam was indeed a marvelous experience!

We returned to the mainland in 1970 to raise a family.  I unexpectedly became very ill in the spring of 1974 with Meniere’s disease, which put serious restrictions on my ability to ‘be a mom’. As a result, my husband had to hire someone to take over those responsibilities while I recuperated. Months later, as recovery was progressing, I found that I could be more mobile and felt the need to ‘get out of the house’, although there were limitations as to what I could do.

As an aside, I should mention that my husband and I had already started to collect art and had several pieces in our ‘collection’ including work by Tony Delap, David Hockney and Laddie Dill. We did not own any photography. You can imagine my big surprise when my husband gave me a get-well gift, which included three gelatin silver photographs, one by Bill Brandt, one by Harry Callahan and one by Imogen Cunningham.  While they were lovely to receive, I distinctly recall asking, “Where will we hang these”?  As I look back, I note that this was the start of it all, unbeknownst to me at the time.

With an interest in the arts and my need to get out of the house to ‘do something’, I began to work at the Jack Glenn Gallery in the newly established photography department, even though I admitted knowing nothing about photography. That admission did not seem to dissuade Jack Glenn who told me, “I could learn all about it in no time, since it was such a new and relatively young art form, the next big thing!" During the brief time that I worked at the gallery, I was introduced to Lewis Baltz, Robert Cummings, John Divola, Thomas Barrow, and many others.

The Jack Glenn Gallery closed in 1975 and it was Jack Glenn who suggested that I open my own gallery. The seed was planted and the Susan Spiritus Gallery opened with its first exhibition of work by George Tice in June 1976."

Laurie:  "How fascinating! What a wonderful read! I'm curious about the person that took care of you and your brother. How old were you and how long did you have the same caregiver? I wonder... how your caregiver influenced you."

Susan: "While my brother (older) did not like our caregiver (not called that 70+ years ago), I certainly did as she was a sweet 'old' lady. I remember her to this day, Miss Ring was her name. I'm certain that she had a big influence on me. She was our daily babysitter, for probably 5 years. My mother (b.1911) was a mathematician who received both a bachelor's and Master's degree and just was not a stay at home mom. I think she was so much better off outside of the house. My mother was a very strong woman and one who always spoke her mind. She 'marched on Washington', was 'another mother for Peace', and was active in her own little way with UNICEF because she believed in helping children. I'm strong as are my daughter's, but certainly not as forceful as I see my mother to have been.

What I haven't shared with you and am happy to do so, is that the Menniere's disease (a virus) was centralized to my inner ear and as a result, killed my auditory nerve and took all of my hearing from that ear. I've been deaf (single sided deafness) since 1974. Ironic – unbelievably so!"

Laurie:  "Well now this is my kind of interview! So this is really interesting because we've all heard that when one sense drops out for whatever reason, another sense picks up the slack. Is it possible that the Meniere's disease, as bizarre as this sounds, did you an extreme favor? By you losing the hearing in one ear, your eyes became more "open" to the world around you. I'm sure in your studies at school...you have studied this phenomenon, no?  And to take it further, your mother, a mathematician! You have her genes so you no doubt have the tools of a mathematician...the ability to see relationships, problem solving skills, identify and analyze patterns and logical and critical thinking skills...this...all of this...could be the secret of your success."

Susan: "Laurie, you are so right on!!!
Yes, the gallery evolved from a horrible time in my life, briefly, and as a result, something wonderful developed out of something so horrendous! My illness had me bedridden for many months because with the Meniere's came extreme dizziness and nausea. While I did go through all of the necessary stages of grief -- why me? -- I chose to move forward even though I professed to know nothing of the art world. My husband has always been a great positive force behind me and encouraging me to 'do it'. I learn while on my feet, as they say."

Laurie: "I can only imagine the amount of time and passion that you must put into your business to make it the success it is today. Looking at your website and seeing the amazing artists that you represent, I am wondering, will there be a book about your journey? The stories you must have!

Susan: While I do not have a date for its publication or can honestly tell you if it will come to fruition, I will share with you that this has been under discussion in our immediate family (only!) for many years. I recognize the importance of this, as I was a pioneer in the field, one of the first and few women to embark into this career, following Ursula Gropper, Helen Johnston and Maggie Weston and have much history and information to share.

A few years ago the then director of the Center For Creative Photography, Catherine Martinez, asked me for the gallery’s archives and while I was honored to have been asked, I did tell her that I could not release the material until we had finished with it, should we need it for a future publication!

Yes, you are absolutely correct, I do have a wonderful trove of stories and I hope I’ll be able to transfer them one day into a book.  Perhaps I should start thinking of a title…."

Laurie:  "I notice on your website that you offer the sale of fine art books. Do you think that there is a particular way an artist should go about having their work published? Self-publishing is popular with such publishers as Blurb, My Publisher and Lulu which will get the work out to a lot of viewers but perhaps lose value due to the limits of the quality of paper or unlimited copies. What advice would you have for photographers that want to be published?"

Susan: "I have very little personal expertise in book publishing and feel that I would not be the right person to advise an artist about having their work published in today’s market. Much has changed since I worked with Susan Burnstine to get her first book, Within Shadows published.  My experience has been that most artists feel the necessity to get a book published because it serves to validate them as an artist and brings print sales. I do not believe that this is in fact accurate. In addition, there is a huge financial outlay that is required and this can be prohibitive, unless you are one of a small group of artist’s who have been exceedingly fortunate to have publishers interested in their work and get a book published without any personal financial obligations.

We all recognize that the art world and the book-publishing world have gone through major changes in the last decade, and both are now at our desktops for ease of management.  While I have not published anything online, I’m quite confident that someone could orchestrate a book to be published without even leaving his or her desk!  The options available to artists today are significantly greater for book publication and come at a much more affordable cost, through such companies as Blurb, My Publication and Lulu. While the book may not be as elegant as ones we know to be from a brick and mortar publisher, it will still give the artist a useful tool to use in their career."

Laurie: "Thanks so much Susan for sharing so much of your personal story and your insights. It's been a real joy to get to know you."

Susan:  "I must admit, this hasn’t been your traditional interview - or story! Happy to have shared it with you."