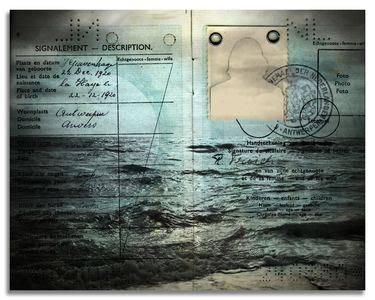 Lisa Cohen says of her work, "This mixed media tintype series began as my response to the 2016 presidential election and all the talk about building a wall to keep “undesirables” out of our country.

It made me think about my heritage and how my family came to the United States in the early 1940s as refugees from WWII, as “stateless former Germans.” My mother has told me stories about her Jewish family’s escape from Berlin when she was a young child. She and her four siblings were taken in by families in France and Holland, who hid them during the war until they were able to leave Europe.  They travelled by boat, “The Winnipeg”, to St. Thomas in the Virgin Islands, and from there to Puerto Rico and then to Ellis Island. I uncovered photographs of my family from before this period, which inspired this series.

In the photographs I found, the children seem innocent and happy, living normal lives, not knowing what was to come. I am struck by how similar things seem today, and how vulnerable families must feel about the unknown future of our country."

Lisa Cohen is a Boston-based freelance photographer.  She is a graduate of Clark University, where she received a BA in Psychology and a minor in Art.

She was a founding member of Women in Photography at Simmons Institute for Leadership and Change and a Watertown Cultural Council Member from 2008-2014. 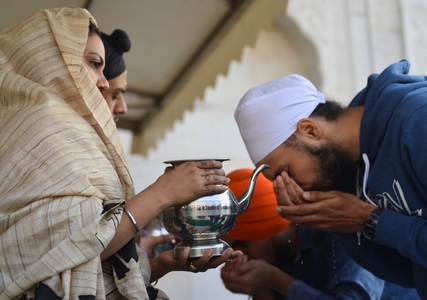 Jessica Strachan says of her work, "Deep in the wells of Delhi during the evening of the national festival of Holi, the Sikh community gathers to worship within their temple. Here, water is essential to worship, renew and draw nearer to God.

Reverence of water runs through the veins of this minority religion; passing through the daily ritual of washing, cleansing upon entering a temple, drinking from a blessed source, ceremonial rites of passage, and even releasing a deceased loved one's ashes into a canal or river.

Within their temple, called a Gurdwara, Sikhs come together to replenish their souls through the pools, streams and splashes of holiness.

Here we see an intimate moment as a woman reaches gently into the inner pool – or sarovar, parents baptizing their child at sunset, and a woman bearing the word “HOPE” across her fingers pouring water into the cupped hands of bowing devotees who are eager to sip.

Everyone is welcome to take part appreciating the wonders of the water, regardless matter of ethnic, religious or socioeconomic background; age, identity or affiliation. All are invited to behold the tears of God, connecting with Him and with one another in this place, where water never loses its purity."

Jessica Strachan is an award-winning journalist and photographer in Detroit, Michigan. She earned her master's degree in social sciences and bachelor's degree in journalism from the University of Michigan. Strachan is a human rights activist with an incurable case of wanderlust, love of street photography, and knack for getting lost with perfect strangers who become longtime friends. She enjoys catnaps in a beam of sunlight, farm-fresh foods and brag-worthy coffee. 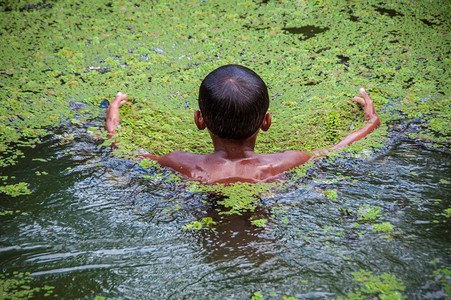 Samanta Aretino emigrated from Buenos Aires, the country of her birth, to Spain in 2001. She says this experience greatly affected her work and made her look at the world in a different way, with the knowledge that there are many ways to live, create, express, feel, and relate to people. Aretino’s photographs reflect this understanding: they're an exploration of the world and how people navigate through it.

Aretino says, "I studied photography at the School of Art Arroyomolinos, Madrid. Then I continued my studies at the School of Photography of Pedro Menendez de la Cuesta, Arroyomolinos-Madrid. I have done specialization courses with various artists, including Juan Manuel Díaz Burgos.
I have also worked as a volunteer in ARCO Art Feria in Madrid in 2014."