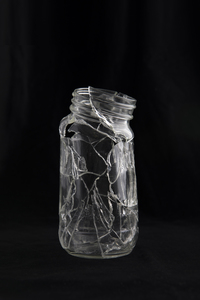 CURATOR JANE SZABO: “The Creative Self Portrait” is the inaugural contest on LA Photo Curator. The submitted work was truly powerful, making the act of jurying the work incredibly challenging. That said, there were a few that really stood out, which I would like to write about here.
Selected for first prize, I have chose Lauren Vaile’s Untitled Self Portrait #10. This haunting image of a broken glass Ball Jar, carefully pieced back together struck me like a hammer and the sensation is still in my mind. The work is effective on so many layers, and it is without a doubt, a self-portrait. Shattered, broken, yet still hanging on and keeping it together. The image holds a powerful metaphor, and is also a strikingly beautiful photograph.
I cannot mention this work without also referencing Lauren Vaile’s other submission, Untitled Self Portrait #1. Here she has photographed the broken fragments of a porcelain figurine, each piece laid out on display, significantly NOT reassembled. The broken figurine also is a powerful self-portrait; telling a story, yet leaving much untold.
The two images are equally powerful, but I selected Self Portrait 10 both for its simplicity, and for its hope. Can you discuss your ideas behind showing two fragmented selves, one that is disassembled, and one which has a tenuous hold on wholeness?"

LAUREN VAILE: "Thank you so much again for selecting me as the winner of this category. It is an amazing opportunity and I am happy to elaborate the best I can on the question that Jane Szabo has about the differences in the two pieces.
This work has to do with my anxiety which is brought on by many different things but the process in which I bring myself back to a calm state of mind is very similar. I try to regain control over the situation and usually that comes through the act of organizing whether it's the space around me, or if the problem isn't tangible I create lists to help me organize the things that I cannot, meticulous and time consuming processes really allow me to fight off the anxiety/panic attacks.

This process of rebuilding is seen in both the Self Portrait 1 and Self Portrait 10. There are panic attacks and anxious moments that I can gather myself up to the original state much easier, I feel them coming on sooner and pull myself out before it becomes too much to handle. This is represented through the whole object in Self Portrait 10, it is almost whole again but the object is left with marks and there is a beauty found in the imperfections. There is a resilience seen in the objects and a sense of hope in those of managing to come back more completely to a sense of normalcy.
There are also moments that go beyond the point of fixing and those are represented in the photograph Self Portrait 1. I may not be able to put myself back together in the same way but I can organize myself in a way that makes sense for me. There is truth in the fact that many of us that deal with anxiety or panic attacks can never remain in a state that they once were in after certain episodes and I did not want to glaze over this, that is why I chose to do a piece left fragmented. This Self Portrait may be more visibly damaged but the delicate handling shows an intimacy and acceptance to the state it is now in."

CURATOR CAROLYN HAMPTON: "This image makes you stop and stare, because one wonders how this shattered jar is still able to hold itself together in what is somewhat close to its original shape. And then, once informed that this is a "Creative Self Portrait", it hits you quite powerfully, and makes you want to know more. What circumstances led the artist to feel this way -- to be "shattered," and barely holding oneself together? I think that many of us can relate to the powerful emotions depicted, and so I find it to be quite a compelling image. It reminds me of an Emily Dickinson poem:
"I cannot live with You –
It would be Life –
And Life is over there –
Behind the Shelf

Congratulations to the winner of this contest!"

CURATOR STEVE GRODY: "Interesting to see an object-as-self-portrait. It is transformed in this new context. Something transparent, a not-quite former container, now damaged but relatively holding together, a strong poetic metaphor."

CURATOR JOHN NEEL: "When I was a kid, the jar played a prominent role in my understanding of the world and the things in it. For me, glass jars were indispensable necessities for many of the activities of my growing up. Mason jars and containers of all kinds were storage places for the things I loved. They were where I kept my souvenirs, my coins, very small toys, and my collections of random bits of this and that.

Mostly, the jar was a makeshift home for walking sticks, June beetles, spiders. crickets, fireflies, bees, tiny fish, snails, frogs and snakes. Jars were containers that could easily be transformed into transparent habitats. Tiny air-holes could be nail-punched into the lids to allow an exchange of air, while small sticks and grass supplied a habitat where the prey could survive at least a short term of captivity. I once kept a live pygmy rattlesnake in one next to my bed for a short period.

I could dip a jar into a pond or a creek to capture minute insects, tiny algae, the larvae of dragonflies and mosquitos. Holding it up to the light of the sun I could discover the murky clusters of living organisms and microscopic creatures. It was a transparent window, in which to examine life. A container of life, a portable terrarium that could hold the objects of my curiosity. The jar was a means of exploration and discovery. A way of holding my world in my hands.
What on Earth is so significant about a Mason jar? What does a jar –  seemingly floating in a dark void have to do with anything? What is the sadness of one that has been completely shattered? In the scheme of things, I would say, almost anything and nearly everything you might consider."

CURATOR MYRON LEE:  "Being a self portrait makes this shattered yet intact jar a truly powerful statement. What stuck to my mind most is that very sharp dagger shaped piece of glass pointing subtly outwards. This self, shattered violently, appears to be dangerous. The piece is photographed beautifully. The black background and spot lighting augments a grim mood and makes the jar seem desperately alone. Well done. Some technically minded photographers may like the entire jar in focus, but I like it the way it is because the fading blur adds to the mood and  fragility of the moment."
-----------------------------------------------
Our first place winner, Lauren Vaile, is a Canadian born artist that has recently graduated with a B.F.A. from OCAD University in Toronto, Canada. Lauren practices mainly within conceptually based photography and also integrates mixed media techniques to elevate the photographic body of work. Lauren says of her work, " I am attempting to disrupt preconceived perceptions and understanding of situations, objects and moments to force the audience to reconsider the subject in a new way that otherwise would have gone unseen." We, at L.A. Photo Curator, think that she has succeeded with her intention with her placement here. For more info about Lauren, go to www.laurenvaile.com
-----------------------------------------------------
A percentage of artist fees go to Lauren Vaile’s chosen charity, Arts Access Fund
www.artsaccessfund.org/site 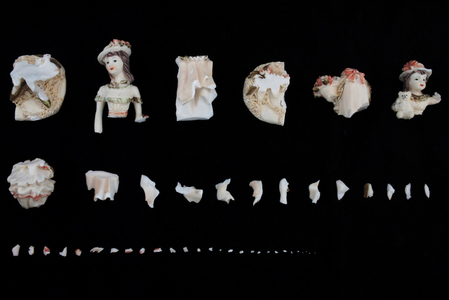 UNTITLED SELF PORTRAIT 1 by LAUREN VAILE