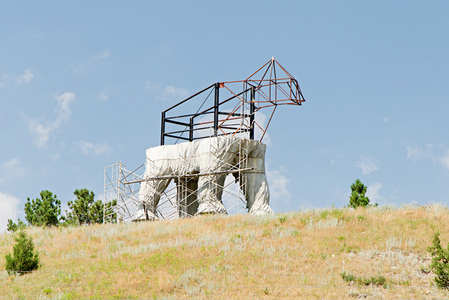 Curator Carol Erb says, "Paul Sisson, my first place selection, had three very strong entries that I felt worked very well together as a group, and alone as individual images.

The concept of documenting our fading cultural landscape is certainly not new. Paul's series captures this genre in a manner that is both humorous and bleak. Here, he has shown us derelict representations of animals in the western landscape that I find quite charming. In the winning image, "Build a Bear", we see the scaffolding and support for what appears to be the lower half of a polar bear. Is the bear under construction? Or has the project been left unfinished?  Why a bear? Why on a hill? The power of this image is in these unanswered questions.

I love a good road trip, and am drawn to photographic work that finds and documents our vanishing cultural landscape. What is it about this type of photography that inspires you?"

Sisson says, "The body of work that these photographs come from, Not So Far From Here, has really become a process-oriented project for me. Being able to get in the car and have several days in a row to simply take photographs and think about the work without outside distractions or obligations is incredibly freeing and cathartic. The open road and lack of responsibility can provide a good deal of inspiration when you find yourself alone with a camera."

Erb asks, "You seem to focus on the western states. What is it about this part of the country that you find compelling?"

Sisson says, "My exploration of the western states started out as a matter of geography. This project is made up of a series of unplanned road trips where I’ll leave my house in Boulder, Colorado with no preconceived notions of where I’m going or how I’ll get there. So logistically speaking I’m spending the vast majority of my time driving and photographing throughout the west, even as I expand the project by driving further and further in either direction. That said, I have found that my home region, Colorado and the surrounding western states, does provide the most interesting landscapes and juxtapositions for my photographic sensibilities. Generally speaking, the views are more expansive, the skies bigger and bluer, and the oddities more curious."

Erb asks, "Can you tell us what it is about faux animals in the landscape that attracts you attention?"

Sisson says, "I’m on the lookout for anything out of the ordinary and have seemed to stumble upon numerous wildlife themed scenes over the years. While I can’t say I’m looking for, or even specifically attracted to, items involving faux animals, I do think they are somewhat ubiquitous out West. There are so many cultures and industries out here that use animal symbolism in their marketing and architecture that it provides more opportunity for someone like me to find the ones that are in a state of disrepair or in some sort of interesting position on the horizon. I still can’t explain the presence of a giant half-Polar Bear in the middle of South Dakota however."
Paul Sisson says, "Not So Far From Here is a unique photographic portrait of the Western American landscape.  The images seek beauty in non-traditional places, show a crumbling rural culture, and find humor in simple and subtle ways.  The project emphasizes the journey, rather than the destination, and explores the things that can be found by slowing down and taking in the world that lies beyond the tunnel vision that so often dominates our daily lives.  Over the last several years, Sisson has been collecting these scenes during open-ended, unplanned road trips throughout the Western states and beyond. Originating from his home in Colorado, he has traveled through 21 states and driven over 24,000 miles spanning 19 separate trips since 2012. With an emphasis and enjoyment for the process, Not So Far From Here is a thoughtful look at life on the open road."
Paul Sisson is a 2013 Bachelor of Fine Arts in photography graduate from the University of Colorado Denver.

Originally from Minneapolis, MN, he currently resides in Arvada, CO. His work has been shown across the United States in a wide array of solo and group exhibitions and publications.