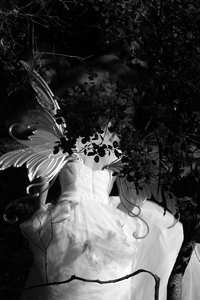 CURATOR CAROLYN HAMPTON: “My eyes immediately settled on Mara Zaslove's work, "Into the Forest", and I could never quite pull myself away from it. Like any great visual story, it captivated me and made me want to know more. Who is this magical creature, partially obscured by nature, apparently fleeing the scene? What a delicate dress and what exquisite wings. I loved the tones used, and I enjoyed the composition because it included so much of the natural surroundings. Congratulations to Mara! I look forward to seeing more of her work in the future."

QUESTION FOR ZASLOVE FROM HAMPTON: "Mara, could you tell us more about your inspiration for this image, as well as your process?"

MARA ZASLOVE: "Thank you so much for choosing my image!  This is such an honor.

I had many images that seemed to fit this theme but this one jumped out at me.  It is from a current series "Into the Forest". Unlike many, this was not constructed or choreographed. Some of my best work is spontaneous.  When driving to a wedding in the hills of Santa Barbara, I became somewhat lost. Having stopped for directions, as I turned a bent in the road, my eye caught sight of this vision in white. I pulled off and hiked into the woods. Since I planned to shoot an event, I had my DSLR with my telephoto lens (I always have a point and shoot with me, but this was a fortuitous exception).

I stealthly crept towards the bride, shooting surreptitiously so as not to interfere with or disturb the others at work. As a result, I was limited to the back of the bride but was captivated by the setting of the foliage as a backdrop against the white dress and 'wings'. This scene seemed reminiscent of a dream or fairytale and one could spin a
story to follow a multitude of themes.

As mentioned, this was shot with a digital camera (I also embrace using analog and infrared) but it was set in the black and white mode. I frequently practice this type of 'street photography' where I am driving, and my eye captures an image or scene that draws me in. Often, I turn the car around in the hopes of doubling back to document the situation. There is a 'bit of luck' involved with this process but I also seem to have the ability to bear witness to a unique image 'on the fly'. Trusting my instincts is paramount and honing in on the subject, an art (of multitasking, often while driving). This candid experience can be frustrating, sometimes missing the shot due to circumstance. If the opportunity arises, I will also approach someone on the street. Some will permit me to take their portrait and others, not.

This process does not require 'preparation', so the lighting is natural and use of the camera, in the moment, where set up depends on the conditions at hand. There is no manipulation required (in photoshop) other than an occasional crop or contrast.

Outside of street photography, there are many other practices and themes that I follow. Many of them can be found on my website.

www.marazaslove.com.
Thank you again for recognizing my work."

CURATOR JANE SZABO: "Mara’s lovely image is steeped in mystery, magic and romance! I love that we see the person from behind so this becomes a story rather than a portrait. Congratulations to Mara on a successful image!"

CURATOR STEVE GRODY: "Much more interesting to have a partially obscured subject, which makes us much more curious as to what's there. But the lovely range of tones and textures is a pleasure in itself. So a nice balance of the elements of content and the "poetics of the plastic" (i.e. the materials used)."

CURATOR RICHARD S. CHOW:  "Quite instantly, after a glance of this image, I can imagine a lot of the possibilities for narratives. I commend the selection of the Title from Mara, which took me to a somewhat familiar place and potential stories from “Into the Woods” created by Sondheim and Lapine. This image shows a genuine sense of adventure, leaves quite a lot to the imagination and stories I like it."
------------------------------------------------------------
Zaslove was a recent finalist with her "Ancient Lines", in the Fine Art Category of the Julia Margaret Cameron Competition.
Three of her images, "Riding the Rails, Riding High and Blowing Bubbles" have been accepted into the show Wilshire Vermont: The Art of Life Connected in the Koreatown neighborhood in Los Angeles, California. It will be featured for one year starting February 14th, 2016.