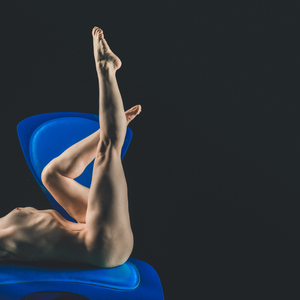 Curator Mark Indig's review:
"The theme lent itself to landscapes, architecture, constructed images, abstracts, collages, fractals, organic materials, etc. Each of those categories had a winning image but I didn’t expect so many uses of the human form to express the theme. And this image in particular, with its rigorous composition, use of color and strong lighting, stood out from the rest."

Mark Indig asks Brian Cann:
"Was the image created for the contest or another project?"

Brian Cann says, "The image was originally created for an editorial project. The chair is part of the inventory of a studio I use and, having shot a series of figure studies with the same model, Alex, using a shabby wooden blue chair in a previous session, the size and deep blue of the chair offered to provide a larger stage for her to pose on."

Mark Indig asks,""What was behind the concept, the choice of color and the composition?"

Brian Cann says, "The concept for the shoot was to explore body form and shape utilizing the striking color, lines and curves of the chair. The chair is a particularly pleasing and rich blue which we knew would contrast nicely with Alex's paler skin tones. It was shot under studio light in a completely darkened studio with black walls.

It was primarily an exercise in shape and form, some images have the body adopting the curves of the chair, others have the body shape taking contrasting forms, as in the case of the image here with the vertical leg and the triangle made by the bent leg, although so much of that is due to the body control and sense of form of my model, that it happens on the fly during a shoot and, rather than being pre-planned, is recognized only as it occurs."
Brian Cann says of his work, "My goal is to produce interesting, non-exploitative, authentic portraits that stray away from cliche and in which my models are co-creators: collaborators in a process. I work with interested models without regard for gender, age, ethnicity, or body type, but prefer to work repeatedly with a model rather than constantly photograph someone new. Understanding and trust have to develop over time.

My models are often more mature, and bring experience to the shoots as well as body condition. Images of the naked human form are both an act of resistance in a world in which censorship and re-invented/falsified concepts of morality are becoming more dominant and also timeless, because nothing dates an images as much as the clothes portrayed in it."

Additional review by curator Dianne Yudelson: "The juxtaposition of organic and geometric elements in Brian Cann's 'Alex and the Big Blue Chair' provides a contrast that enhances the dimensional framing and resulting formation of a center focal point--a blue triangle. The side lighting of both legs expertly provides a highlighted surround for that focal point."
Born in England, moved to Germany to become American, but still living near Stuttgart, Germany. Brian Cann taught math at school and university. He studied photography, stopped, started again, motivated by early retirement and his wife. An early specialization in the studio slowly shifted to outside images. Portraits of athletes, many of them masters, morphed into figure studies and explorations in erotic and fetish photography, often with the same models: typically strong, fit, and older.
Career highlights:
Solo show and calender of landscape nudes, Waldenbuch, Germany / Calvendo Verlag, 2019-2020.
In the last two years my work has also appeared in IoN magazine, 'Mein heimliches Auge,' WASE magazine and others, and has been featured in juried exhibitions in the USA, Scotland, Hungary, France, Montenegro, and Germany.
Juror's prize in the 'Material' (2019) and 'CorpoRealities' (2020) exhibitions in the PH21 Gallery, Budapest, Hungary. Winner, nude category, 8th Tiger awards (+4 honorable mentions). Two honorable mentions, nude category, Monochrome Awards 2019. Honorable mention, category 'Grace,' Photos de Femmes. France 2020. Four honorable mentions MonovisionAwards 2020.
brian@briancann.com
www.briancann.com
https://www.instagram.com/brian.cann.photography/