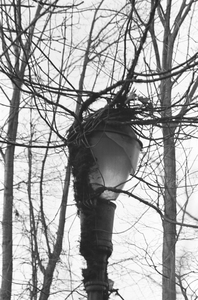 Jeff Alu's review: "As I was looking through all of the image submissions the first few times around, I actually skipped right over this image.  This is probably due to the relatively narrow depth and the general softness of the image.  This image does not pop in any way and let’s face it: in our current age of eye-popping, photoshop-enhanced, color saturated, crystal-clear imagery, an image like this might get overlooked.

Guilty as charged.  But once we shift out of our fuel-injected mindset and lay on the breaks, new worlds can open up.  That was exactly my experience with this image.  My jaw dropped when I actually stopped and looked at it, or better, looked into it.

The drama here is overwhelming, though it is a quiet drama.   I don’t feel a struggle taking place as much as a surrendering or resigning, but perhaps not all hope is lost.  If there is any hope here, it is up to the viewer to decide, based on individual life experience and need.

Thank you Ana for reminding us to slow down enough to find intense drama in the subtle."

Ana Paula Cordeiro says of her work, "From an artistic-alienated background, I first had contact with Visual Arts through photography.

However, after two solo shows and professional assisting experience as a photographer I felt the need of developing a set of skills for translating visual experiences into practical objects.

I am nowadays a full-time bookmaker, my time being divided between collaborations, commissions and my own artistic practice, which has layered photography with letterpress printing. I’ve been part of various group shows nationwide, and since 2008 the work I create and produce has been collected privately and institutionally."