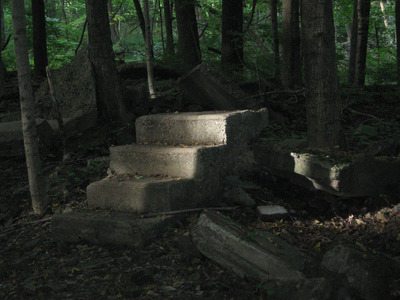 Curator Jeff Alu review: "I appreciate not only that Jeff found this image worthy of photographing, but also the way in which he photographed it.

The composition is not trying to be clever, and I don’t feel the ego of the photographer at all.  The stairs take center stage and Jeff allows them to exist on their own terms without manipulating them in a way which might otherwise falsely over-heighten their psychological impact.

Their innocence and simplicity alone increases that impact. I could go into heavy, philosophical interpretations about the image, but I think that would be a mistake.  The power of this image comes from its ability to elicit personal thoughts and emotions from each viewer and the calm, quiet and wordless moment it suggests.  I decline even to talk about compositional aspects, as does it really matter?  I just want to continue looking at the image.

Thank you Jeff for producing what I find to be a truly exceptional photograph.

I would love to know if this is something that you found walking along which made you stop in your tracks, or did you find it and wait for the right time to take the shot?  Also, what were your considerations in the processing of the image and how did you enhance it?"

Jeff Evans: "During a walk with a friend in the spring of 2001 she showed me the steps and I took a photo of her sitting on them.

A couple years ago I took a photo of the steps in the fall, with leaves on them.  But the photo didn't have any sense of mystery that I associate with the steps.

So last year I tried photographing them several times during the summer at different times of the day until I got a shot of the light shining through the trees onto the steps.

Using Adobe Lightroom, I increased the contrast of the photo slightly to increase the mystery.  The steps aren't part of a house foundation, like I originally imagined, but part of a load of concrete that was dumped there and the woods grew up around it."

Jeff Evans says of his work, "I photograph ordinary objects and situations that often go unnoticed because they're ordinary and everyday. Once noticed, however, they defy expectations because there’s something out of the ordinary about them.

The photographs are made in an objective documentary style, but have a sense of humor that undermines their objectivity.

I’m interested in seeing with clarity, in elements of surprise, humor, the slightly surreal, and teasing the viewer about what is real and what is not."

Jeff Evans' job as a rocket scientist wasn’t as exciting as he expected, so he took some photography classes as a creative outlet.  Soon he was going to exhibits in galleries and museums and had collected 300 photo books.  But he found the best way of learning was taking lots of pictures.