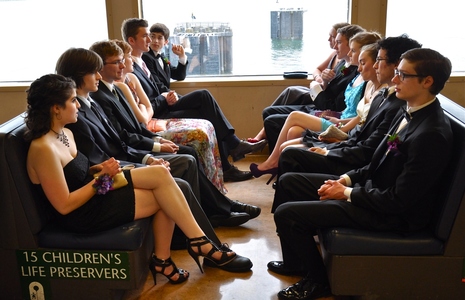 Curator Barb Peacock: "A rather non- traditional and comical photograph of Hometown prom kids on a ferry. I love how ridged, symmetric and awkward they all are with the little added humor of the ‘children’s life preservers’."

Longstreet says of his work, "No one just takes up space. The human condition is an entire canvas of thoughts, emotions and reactions to circumstances.

In my photography I try to capture the truth about diverse people and how they live… and how they reflect their respective spaces.

My subjects never know they’ve been photographed. I don’t set-up or pose any shot and never employ anything but available light."

Harry Longstreet is retired after twenty-five years as a writer, producer and director of filmed entertainment, primarily for television. When he’s not busy with his wife, children and grandchildren, he keeps the creative juices flowing with his still photography." 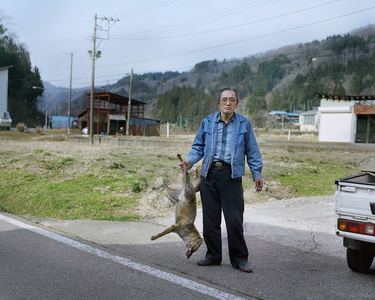 Curator Barb Peacock: "I like the pure frankness and odd nature of this photograph. In this Hometown, the man looks like he is a native of this land and has spent his whole life here. There is a strong sense of place and that things are done a certain way there. Hints of his surroundings are scattered through out the composition with the leading lines of the pavement, the mountains and the telephone lines. His emotionless stare and body language holding the beautiful dead fox complete the story."

Seiya Bowen says of his work, "Rural towns in Japan are in crisis. The traditional lifestyle in these fishing and agricultural communities can no longer support the younger generations who are drawn to larger cities for economic and cultural reasons.This migration left these desolate towns populated by a handful of older very traditional people, who have lived in these towns their entire lives, as their parents before them had done.

Each summer for over a decade I return to my childhood home in Japan. Conscious of the undeniable fate of my home I am photographing this town to preserve and remember its existence- both personally and culturally.

The photographs examine the deterioration of a once active community and the new modern edifice that are built in its wake." 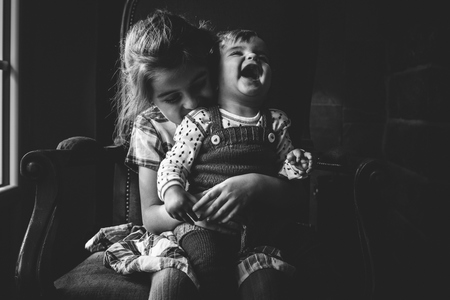 Curator Barb Peacock: "Home is where the heart is in this beautifully executed moment of pure bliss. The photographer has captured a precious and intimate moment of love shared between two siblings. Her excellent use of window light and rich black and white makes this an image reminiscent of images in The Family of Man."

Nadia Stone says of her work, "My photography has always been turned around Childhood. What I love where we live is that the people we know here are always close by. We live a lot outside even in winter. The life is oriented around the beach, skating and bike. We live in a Summer holidays destination, with large “French “camping areas. These camping are privately owned business and so, we triple our population in Summer time. But when school starts again, everything shuts; shops, camping, waterslides… Everything is quiet, but we are all still here. It’s at this moment that our kids, kids who live here, have their land of Freedom back. They can enjoy their beach, they bike ride without any worries, in the forest, they have their skate park and their pumtrack for themselves.  I started this series few years ago trying to catch some moments of my kids and their friends being free in their environment. What also I think is important, is to incorporate the beach/dune.
Using natural lighting and creating a timeless feeling are the focus of my shots. I love to capture the mood with my black and white processing, searching for new depths in the absence of color."

Nadia is a French lifestyle photographer who lives with her Australian husband and their two kids in the South West of France. Natural lighting and timeless feeling have been the focus of all her shots.

www.nadiastonephotography.com ( I am rebranding so right now it s under construction)


GO TO NEXT PAGE TO SEE THE LAST HONORABLE MENTION! 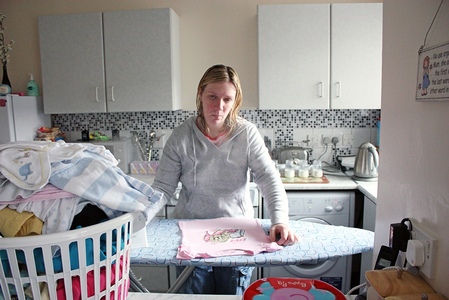 Curator Barb Peacock: "The photographer has captured a very intimate and somewhat disturbing image of his sister in her home.  Her world seems to be coming down around her and she seems lost and asking for help.  Her eyes are distant and unable to focus. She is a Mom overwhelmed by duty and daily drudgery."

Jonathan David Smyth (b. Belfast, UK, 1987) is an artist working with photography, video, performance, and incorporated text.  He received his MFA from Parsons School of Design in 2014, and his BA with Honors from Edinburgh Napier University in 2010.  His work has been exhibited in the United States and abroad.  He lives in New York City.

Smyth says of his work, 'House Hold' is an ongoing series about my adoptive family in Northern Ireland. Growing up, I wasn't allowed to talk about my adoption, so I left home at sixteen and tried to move on. A few years later, I began to photograph my family to create some sort of a personal archive.

I see this work as a well-balanced document of the people I grew up with. By well balanced, I mean they are attractive images, but they are not the kind of photographs you would find in the family album. For instance, my mother isn’t so keen of the portrait of her eating ice cream, and certainly does not consider it a good photograph. For me, I see beyond the ice cream smear on her lip, and my dad’s glare at the camera. I see a moment that only I, as their son, could have captured."