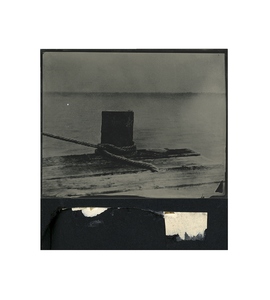 THAT LUMBERED ALL THE WAY...by Traci Marie Lee
HONORABLE MENTION
(Click on image for larger view)

​Review by Curator Jane Szabo:
"Traci Marie Lee’s That lumbered all the way... leaves much room for the imagination. The original B&W photo of a rope tied off on the dock makes me think of departure, but the rope is taught, so perhaps the boat has not yet set sail. The contemporary layering of the old photograph, with the evidence that this photo is a remnant in a photo album, where other, perhaps more precious family photos have already been removed, only heightens the sense of absence."


MY OWN JOURNEY FOLLOWS NO SUCH LINEAR NARRATIVE. IT STARTED THE MOMENT I FOUND THE PHOTOGRAPH BUT HAS MEANDERED EVER SINCE, THROUGH UNCHARTED RESEARCH AND TO NO OBVIOUS DESTINATION.

Traci Marie Lee says, " In this body of work I am appropriating slivers of images, text, and artifacts from the familial archive.

There is an obstructed rationale of what a photograph is and does, as well as a displacement of the contexts of photographic processes. Incorporating multiple image-making properties and practices, the process of how we contextualize a photograph's objectness and our associations in relationship to photographic material is exposed.

The original content, the index, becomes secondary - taking its unaccustomed place on the peripheral of significance. Distinct passageways emerge and are found within the distillation of expectations and longings attached to any familial or institutional space.

Each individual work incorporates alternative processes, such as the kallitype and collodion, as well as various methods of collage. These mediums string together disparate images and artifacts to create an entirely new, complex image.

The success of the Archive represents only half of the material – the half that has survived. The matter lays somewhere in between what is present and what is missing. Perhaps these instances are the keys – the markers connecting bodies and identities, generations and histories; the physical indication of an unidentified connection."

In her work she is interested in the implications and consequences of the Snapshot and the Constructed Image on memory construction and preservation. The compulsion to excavate and curate leads to finding new methods of holding onto brief, constantly changing realities, as well as confronting her own tendencies and obsessive drive to collect, as a process of examining loss. 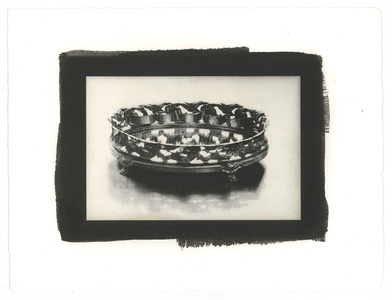 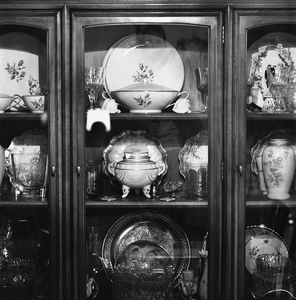 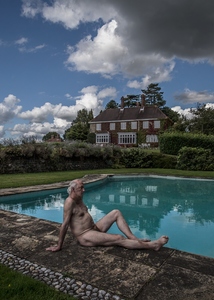 MEDITATION ON TRANSIENCE AND MORTALITY WITH TIM ANDREWS/BEFORE THE HOUSE MOVE, HORSHAM, UK by Vanja Karas
(Click on image for larger view)

Vanja Karas says, "As human beings we seem to be permanently caught up in the storm between continual change and repetitive patterns of both history and human nature.

This storm is what we seem to call progress. My artistic practice in the broadest terms explores the nature of transience and impermanence as the core of our existence but also the cyclic conception of time and its broad recurrent patterns.

Ultimately my work is attempting to depict the cyclical nature of something that is forever different but ultimately always the same. In my practice I work in space, in print and on screen."

Karas' work explores the timeless themes of life, death, transience, the irrevocable passing of time and the constant interplay of memory and immediacy.  She is interested in altering perspectives and in turn opens the idea of existence and reflection within her work: the ordinary sits alongside the surreal, demanding our renewed participation and creating a lingering sense of what is beyond.

ABOUT THIS BODY OF WORK
MEDITATION ON TRANSIENCE AND MORTALITY WITH TIM ANDREWS-
Karas says, "In 2005 Tim Andrews was diagnosed with Parkinson’s Disease. He has since faced his mortality by turning his illness into an art project. Tim has over the years, during what must have been a very difficult period of his life, created a beautiful conceptual time piece, which is ultimately about love and lust for life.

He asked a number of photographers whose work he admired to photograph him as part of his project Over the Hill, a project he dedicated to his wife and family. Tim approached me a few years ago to be part of his journey of self expression and collaborate with him on this project. I feel that I have been very lucky and privileged to have been able to capture these intimate portraits of Tim, as he was facing and confronting his mortality, in his space, the houses where he used to live.

After our initial shoot we carried on collaborating so the second series (by the pool in Horsham) were taken  a year later in Horsham, after the house was sold and just before the keys were given to the new owner. While we were shooting outsde the valuers were inside the house valuing and marking valuable objects and furniture.

Since it’s inception in 2007 this project resonated with so many, it featured on The Culture Show on BBC TV, had over 200,000 pageviews on his blog, 9 exhibitions, articles and features in The Big Issue, Photography Monthly, The Guildford Magazine, The Times, The British Journal of Photography, The Guardian Weekend magazine, The Daily Telegraph and The Parkinson magazine.

More images from this series in case some of the images attached can not be used." http://vanjakaras.com/galleries-2/tim-andrews/

Vanja Karas is a Belgrade-born, London based Artist, Curator, Designer and Creative Director. She graduated from the University of Arts in Belgrade, followed by an MA from the Royal Academy of Dramatic Arts and King’s College London.

Karas began her creative career in theatre directing, and from there moved on to work in a range of other visual arts media including film, video, multimedia, graphic design and print.

Her work has been published in books and magazines and commissioned for a number of private, public, museum and corporate collections including: Swiss Re (the Gherkin), St Mary’s Hospital, Hotel du Vin, Malmaison Hotels and a number of De Vere Venues including 1 Westferry Circus.Earlier this year one of Vanja’s artworks sold for £10,000, the highest sale of the evening, at an auction at RBS City of London Headquarters. Auctioned by Colin Sheaf, of Bonhams, in aid of Art for Grenfell and the survivors of the Grenfell Tower disaster. Some of the other contributing artists included: Gilbert and George, Boy George, Sue Tilley, Zandra Rhodes, Will Alsop and Darren Coffield.

Vanja also works as an Creative / Art Director and Curator. She is the Founder and Curator of the Photography Open Salon, (Arles, London and South-East Asia) which ran alongside the renowned Les Rencontres d’Arles photography festival and which has since its inception in 2011 exhibited over 200 photographers on two continents and published three award winning books. She is on the Photography Open Salon judging panel. Vanja is also the Founder and Creative Director of Magenta Grove London, an Award Winning London based design studio.

Lives and works in London. 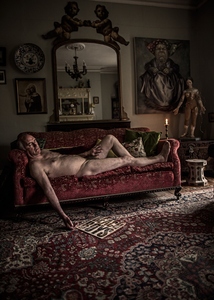 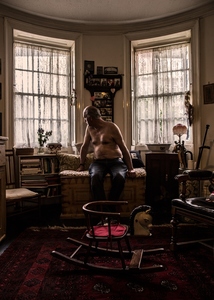 MEDITATION ON TRANSIENCE AND MORTALITY WITH TIM ANDREWS / KNOCK, BRIGHTON, UK by Vanja Karas
(Click on image for larger view) 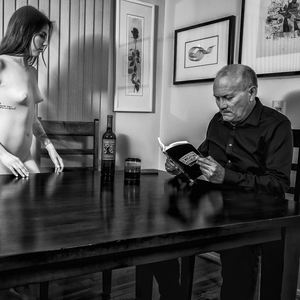 Victor Ramos says "More of my life is behind me now than in front. So the theme of Confronting Mortality is very timely.  My parents generation is now passing on and too soon my and my cohorts time will also be at an end.

Given this reality, I thought naturally, "I wonder what fun I can have with this?". So my small photo series "A Visit from the Angel of Death" was conceived.

Usually Death is portrayed as the Grim Reaper, a figure in a heavy, dark, hooded overcoat and blackness where a face should be, carrying a scythe and following the figure of Time.   Death is also imagined as a dark, winged angel, with no sense of humor.

I thought, instead, when my Time comes, it would be great if my Death is an attractive, luminous being. Someone you would let into your house without hesitation. I still wouldn't believe that it was my time though."

Venues include The Los Angeles Center of Photography, dnj Gallery and PhotoPlace Gallery in Vermont. His work has been published and featured in Digital Photo Pro magazine, PC Photo magazine, fractionmagazine.com, aPhotoEditor.com, Lenscratch.com, L’Oeil Del La Photographie blogs and the Duncan Miller Gallery Daily Photograph.  Victor was a finalist in the Kyoto Hariban photo awards and the Tokyo International Foto Awards competitions. Victor is a faculty member of the Los Angeles Center of Photography.  Victor resides in Los Angeles when he is not on a walkabout in some far away locale. 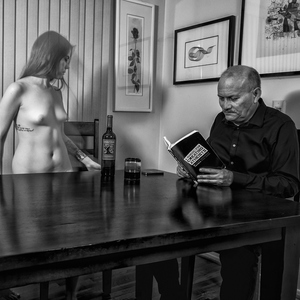 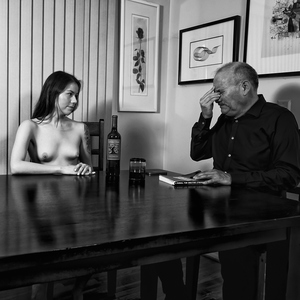