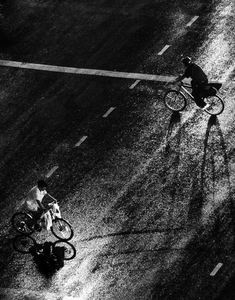 CURATOR STEVE GRODY:  "Here we have an enjoyable example of the Cartier Bresson "Decisive Moment" school of thought, having the luck and the persistance to shoot at just the right time. A simple but striking composition and with the human element drawing us in."
Stacey Leece Vukelj is a street and travel photographer who makes her home in New York City. She has had several images selected for juried exhibits, most recently the H20 Exhibit at the Center of Fine Art Photography in Fort Collins, Colorado, and the Black & White Exhibit at the PhotoPlace Gallery in Middlebury, Vermont. She is currently the featured artist for the "Sundays at Sotheby's" series at Rowayton, Connecticut. Her images have been published in Click Magazine and she is a contributing artist for Capture the Moment: The Modern Photographer's Guide to Finding Beauty in Everyday and Family Life, by Sarah Wilkerson.
Vukelj says of her work, "As a longtime resident and observer of New York City, I am drawn to the juxtaposition of the chaos inherent in the bustling streets and the bubble of solitude that so many of its residents create around themselves. There is an intentional element of isolation in much of my urban photography as I strive to capture this sensation of loneliness in a crowd. I carry these themes into my travel and personal imagery as well, capitalizing on alternative perspectives and architecture to give structure and narrative to my imagery, pulling a viewer close, yet keeping my distance.
For more info about Stacey Vukelj go to:
http://www.vukeljnyc.com