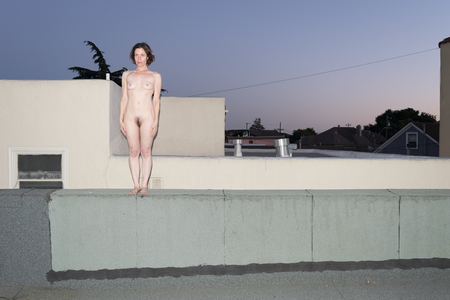 Review by Curator Douglas Stockdale:
"I was captivated by Marcie Rich’s photograph in how she dealt with the concept of boundaries.

Whereas a traditional viewpoint might examine the qualities of a boundary as something that creates separation, she instead placed herself on top of a boundary (wall) to increase the ambiguity and create a subtle visual tension.

The viewer can see the foreground structure as well as the background building and the implied gap or chasm between the two structures.

I enjoy the metaphoric reading; is she overcoming a boundary, perhaps even conquering a boundary, the portrait is personally revealing, but yet still concealing as to who this individual is. Likewise, her subject could appear to be vulnerable while yet this is daring pose also exhibits feminine strength.

The environmental context is cloaked in the subdued lighting adding another layer of ambiguity.

Finally the framing of this composition is slightly off-balance with her subject more to the left side of the frame implying that something(s) are not exactly correct.

This uneasy aspect is also hinted at by the pose; upright and erect if not a bit too formal and stilted, such as how her subject’s hands appear to hold her legs. Including a small portion of the structure on the right border does add to the overall weighting to provide some visual balance."
www.douglasstockdale.com
Review by Curator Susan Spiritus:
"After reading Douglas Stockdale’s review I wanted very much to immediately see the image he was describing and while his description was indeed complete, I came upon a photograph that I was not expecting to see.

While he was quite explicit in the description of the scene, he did not bring to bear that she was nude; (or perhaps I missed it) and only mentioned the fact that the person was unclothed by stating that “...the portrait was personally revealing”.
The visual tension in the image is truly present! Why is she standing so upright and appears to be so tense? The position of the eyes leads me to ask and wonder what is she looking at? And why in the world is she atop of a wall perhaps ready to jump with no pool in sight!
Great image that is raising lots of questions."
susanspiritusgallery.com
Review by Curator Jane Szabo:
I have to admit, "On the Roof" by Marcie Rich is an image that, at first glance, I didn't want to like.

But I was also really drawn to the mystery of the tableau. And, it's not just a photo of a naked, prone, female figure;there is something quite jarring about this portrait. The harsh light of a flash is as forceful as the subject's pose. She stands at attention, as though waiting for something inevitable to happen.

Yet, we don't know what that is, which keeps me looking.The image is quite compositionally strong as well. I am particularly drawn to the lone power line that draws your eye into the scene. The two metal ducts on the roof are equally charming.

This image works for the sum of its parts. Everything is just a little strange, and that keeps my attention!:
www.janeszabophotography.com

Douglas Stockdale asks Marcie Rich: "An open ended question for Marcie Rich, Can you tell me more about the concept and idea for this self-portrait project and this photograph in particular?"

Rich's Response:
"I keep thinking of the expression “dress-up” to explain what I’m doing when I make self-portraits. Of course I’m not wearing any clothes, so how could it be dress-up, defined by Merriam Webster Dictionary as: to attire in clothes suited to a particular role. When I compose a portrait I am playing dress-up to express something I am thinking about. The clothes are the nude female body, the set, and sometimes particular objects, like a dressmakers dummy, a headscarf, or a clown nose.

This project started with a portrait called Olympia at the Super 8. I had arrived at a motel in Yucca Valley. I was late for meeting my boyfriend where he was playing a gig that night, and I was in the throes of a morbid insecurity about whether he actually wanted me to be there. Instead of getting ready to meet him, I started shooting (as fast as I could) a picture of me, nude and awkwardly reclined across a polka-dotted sofa chair and ottoman, with a very alert and funny look on my face. I am very, very confident when it comes to looking awkward. Shooting that portrait was strangely satisfying. A fellow photographer told me it reminded him of Edouard Manet’s Olympia. Needless to say, that was very encouraging.

The roof in On the Roof is the roof of the apartment building where I now live with the aforementioned boyfriend. In March 2017, we moved together from Los Angeles to the Bay Area. It is an understatement to say that the uprooting and new orientation has been difficult. My boyfriend is a pretty copacetic man who rolled well with the change, while I, on the other hand, was truly and honestly wretched to live with. For a little while I wasn’t sure that we, he and I, would make it together, and I surely would not have blamed him if he had decided to pack up and hightail it out.

By the second half of July, I was graduating to being a bearable person, but I was (and still am) genuinely mortified at how crappily I handled the move. Around the time I shot On the Roof, Van Halen’s lyrics “might as well jump” were playing in my head. (Incidentally 1984 was the first CD I ever bought.) I scouted our roof for a possible portrait. Standing at attention on that ledge at night looking up at the sky with only my eyes, I admit that I wished for the aliens to come pick me up. And then I remembered myself when I was a kid playing records in my room. Every so often I would go to the door and open it really fast to catch a look at what was out there because I was convinced, with some dread, that I wasn’t really a part of the family but actually alone floating in outerspace.

I think On the Roof is a call to jump into the unknown.

Epilogue: On the Roof has the distinction of being the one that got me caught. By my neighbor. My neighbor down the hall had recently gone berserk when I (temporarily) blocked our garage door by parking in front of it (he was totally in the right about that). Of course it would be him. The good news is I can report that our relationship has definitely mellowed since."

Rich says in general of her work, "I am sometimes fascinated and often frustrated by my own volatile thoughts. I am very interested in composing photographic portraits. It gives me a reason to be very controlled and creative at the same time. I am currently working on a collection of self-portraits."