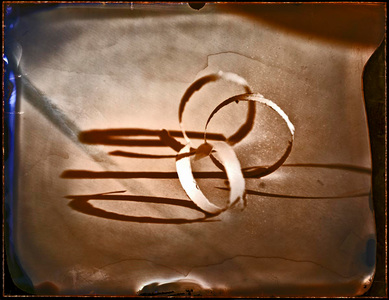 Review by Curator Diana Bloomfield:
"The First Place award goes to Chris Peregoy’s Light Modulator series, with the winning image, Light Modulator-021.  I could never get this work out of my head, and still can’t.  The seeming simplicity of these images belies a rich complexity.  I love that, at its core, the images are all about photography— that is, simply working with light.

The circularity of these shapes, with repetition in the shadows, and the way the light falls on the edges of each torn paper edge, I found stunningly beautiful and smartly executed.  The dry plate collodion process was an inspired choice.

I am drawn to the warmth of Light Modulator-021, especially, with those jagged and imprecise blue edges, which echo the torn edges of the paper curls.  The imperfection of that process itself also provides an intriguing contrast to those perfect repeating circles.

One of my favorite photographers is František Drtikol, a Czech photographer from the 1930’s who created paper cutouts of the human form, working with light, shadow, and form, in some similar ways.

The influence of László Moholy-Nagy is also seen here in those geometric shapes, and- again- in the exploration of light, shadow, form and shape.  While Peregoy’s images, and his process, might give a nod to past influences, his images are all his own.  They are unique, original, and exquisitely realized.  I so enjoyed looking at them, again and again.

Chris, can you tell us something about your influences in creating
these particular kinds of images?"

Chris Peregoy: "I was looking for a winter project last year and was toying with wetplate still lifes. The summer before I taught my wetplate students about lighting with window light that early portrait artists used before electric lighting. Since wetplate requires UV light I thought my third floor sunroom would be perfect for this. I quickly tired out as my darkroom is in the basement.

I had stumbled upon the Dryplate Collodion at the end of that previous summer and thought this might be a good alternative. I tried some flowers and fruit but then thought of a project my first photo teacher, Jaromir Stephany gave our class.

He had us photograph a piece of paper cut and shaped to reflect light and cast shadows. He called them Light Modulators.

I’ve since found that this was popular in photo curriculum from teachers that were taught at the New Bauhaus founded by Moholy-Nagy in Chicago in 1937. Jaromir’s
teacher was Henry Holmes Smith."

Bloomfield: "How difficult is it to create these types of images, ones that are so minimal and deceptively basic—yet also incredibly rich and compelling?"

My exposure could range to over an hour. During that time the sun would have moved and changed my composition. I placed my studio table on wheels and rolled it around my sunroom literally chasing the sun.

Cloudy days were days off. Partly cloudy was difficult due to stopping the timer and starting again when the sun came back. Depth of field was also an issue. Wide open my exposure was 2-4 minutes but gave little depth of focus especially with close focus. I used a variety of lenses, some commercially made and some home made.

My favorite was an objective lens from
a WWI binocular that I got from my grandfather. Many of my images are made
from large sheets of drawing paper cut into patterns. The winning entry came about by cutting my backdrop paper smaller on my chop saw. I then cut the short end into a couple of one-inch-wide spools.

This image uses three of those rings. During my wait I would work on new paper
sculptures and wish I had more room to start another exposure with another camera. I tried working with paper negatives but love the look of the Dryplates when scanned."

Bloomfield: "And tell us about your process, and why— among all the process choices out there— you chose the dry plate collodion for these particular images?"

Peregoy: "Dryplate is an off shoot of Wetplate Collodion. It was first mentioned in the Silver Sunbeam by John Towler in 1864. It is also known as the Tannin Process.

A glass plate is cleaned and prepped as for wetplate but after silvering the excess silver is rinsed off then placed into a bath
of 3.3% tannic acid for a few minutes then dried in the dark. The plates remain active for up to a year.

Here are the steps to developing a Dry Plate Collodion Negative.

1. Start with 40mm of distilled water. Add to this 20 drops of solution
#1 and 44 drops of solution #2. Swirl graduate to mix.
2. Soak plate in tap water for a minute or two.
3. Hold plate emulsion side up and gently flow the developer onto the plate. Try to keep the developer moving but on top of the plate. Periodically pour more developer on plate. Development should be about 5
minutes.
4. Use water to stop the development
5. Fix for 5 minutes
6. Wash for 20 minutes
You can modify the developer if you notice your plates are consistently too light or too
dark. If the sky quickly becomes dark but the other details are slow to develop, the exposure was too short, add 10-15 drops
of solution #1 to the plate developer for the next plate. If all parts of the plate develop simultaneously, the exposure was too long, add a few drops of #2 so that the sky will not be too dense.

I started using this process in the summer of 2016 with landscape images. I calculate my exposure time by setting my meter to  ISO to 3 and multiplying the result by 512 or 1024. An easy way to do this is to
take the shutter speed and divide the denominator fraction into 1024. I
wanted to share my results with fiends on Instagram so I scanned the plate. I forgot to set my scanner to greyscale and when I inverted the image I saw the lovely tones the Pyro developer makes and I fell in love
with the process. I haven’t entered these in many alternative process shows because they all call for alternative process for the final print.

My work is alternative capture with homemade lenses and Dryplate
Collodion plates."


CLICK ON LINK BELOW TO VIEW HONORABLE MENTIONS
https://cm-sites.icompendium.com/accounts/laphotocurator.com/alternative-techniques-in-image-making-curator-diana-bloomfield/honorable-mentions-ray-bidegain-evy-cohen-maureen-delaney-jason-lazarus-alina-marin-bliach-/1