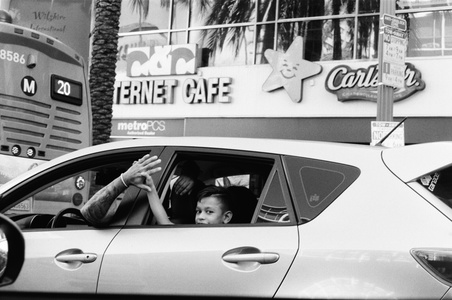 Curator Timothy B. Anderson says, " I like this image because it was the only one to indicate hope, the promise of a future, and the relationship between generations. Nice job!"

Heather Williamson: "First, please allow me to say thank you Timothy. You have no idea how much just noticing means to me...Or maybe you do:) "
Anderson asks: “Were you placed there for a purpose, or was it just a random shot?”
Williamson: "Hmm. That word “purpose” can be tricky. I alone don’t know, so maybe? I will say Tim, when I received the email from Laurie stating the image had been chosen it literally saved me. That's what my work does, save me Tim. I ain't sure if that's the purpose, but it just does."
Anderson: “Were you looking for the dichotomy of the tattooed man and his (?) young daughter (?)?”
Williamson: "I’m sure at the time, behind the wheel and driving, I wasn’t sure of anything because I was only looking with eyes and feeling a lot...
Or maybe I wasn’t feeling at all and that’s why I stopped looking. Happens ya know.
World has a way of showing and redirecting me. In this case, I was seeing. I saw.
*It’s a young boy I believe. I saw the child’s gaze, “I speak that” I probably thought.
Wanna know a secret? Wordless is my fav."
Anderson: “Were you in search of a more positive spin on the category?"
Williamson: "Categories are real hard for me Tim. Submitting my work has been a learning process. I don't think one way and I sure as hell don't feel one way... All the time. When I submitted I did what I can do, choose 3 without deciding, then cut the kite. My submissions embodied 3 perspectives I can have with this word “Relationship”..."
More about Heather Williamson:
She says, "Hello, my name is Heather
It's been some years to say my name and feel good about it .

Many lives I've lived and had to rid (in just this lifetime) and I've realized...

Photography is the air I breathe
It allows me to feel something other than me.

But also allows me to see something that is me in everything.

When I feel uncomfortable
If I don't want to feel a certain way
Or if I'm not feeling at all
The subject(s) of my work offer me courage.

Strength empathy humility and freedom
They assure me...
"Heather, continue".

Most shots are after-while-and-before I'm about to snap die "lose it" and fly...
Far away from this world these ways these laws (controlling) and this pain.
But somehow someone or something appears and I'm saved.
Feelings are also what makes my name
They are just as valuable as is thinking...

When I'm behind the camera
No one is aware of the pain in my mind and if anything.

The pain gives way to understanding
And for that amount of time I feel certain
So maybe you can imagine why...
Why it's important for me not to tell you
How to feel or what to think and/or say
I want to see and show what is
What you and I just may be... Intrinsically

Heather collected and redeemed many qualities while absorbing endless ways and points of view.

After her grandmother's death she found herself catapulted into emancipation at the age of 14. This would also be the year she dove deeper into film photography.

Towards the end of 2012 she found herself isolated and severely depleted.
Upon her return from Cuba, her passion for life diminished into a life barely alive...

She says, "I found myself isolating, not knowing where to go or who I was or becoming. How does anyone know what to do when they see someone's face change?  I was so afraid. I stopped everything. I stopped making."

In 2014 after multiple moves, suicide attempts and hospitalizations Heather found herself in the California Desert where she would be in treatment for over a year.

She learned while being there the most valuable piece of currency is her name.

A long drawn out dusty and dirt road lay ahead but she didn't mind.
Why? Because she also realized
Your name is just as valuable as hers

In the present the subject of all her work is herself (you) No longer is anyone far from her. For she too (has) is waiting in government lines below poverty lines and trying to make sense of self and time...